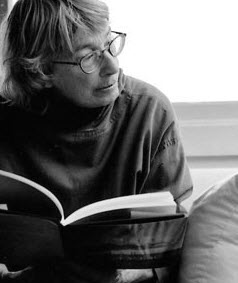 "Poet Mary Oliver is an “indefatigable guide to the natural world,” wrote Maxine Kumin in the Women's Review of Books, “particularly to its lesser-known aspects.” Oliver’s verse focuses on the quiet of occurrences of nature: industrious hummingbirds, egrets, motionless ponds, “lean owls / hunkering with their lamp-eyes.”

Kumin noted that Oliver “stands quite comfortably on the margins of things, on the line between earth and sky, the thin membrane that separates human from what we loosely call animal.” Oliver’s poetry has won numerous awards, including the Pulitzer Prize, the National Book Award and a Lannan Literary Award. Reviewing Dream Work (1986) for the Nation, critic Alicia Ostriker numbered Oliver among America’s finest poets, as “visionary as [Ralph Waldo] Emerson.”" from Poetry Foundation

I go down to the edge of the sea.

How everything shines in the morning light!

The cusp of the whelk,

the broken cupboard of the clam,

and nothing at all whole or shut, but tattered, split,

dropped by the gulls onto the gray rocks and all the moisture gone.

First you figure out what each one means by itself,

the jingle, the periwinkle, the scallop

Then you begin, slowly, to read the whole story.